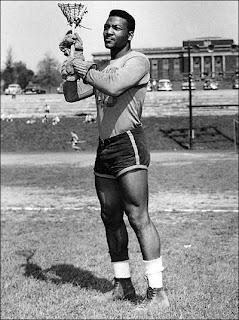 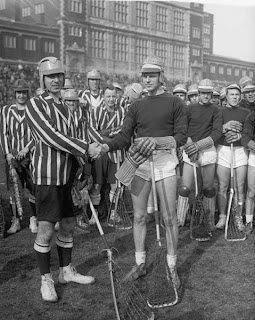 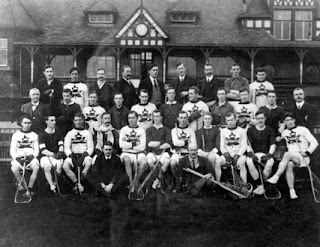 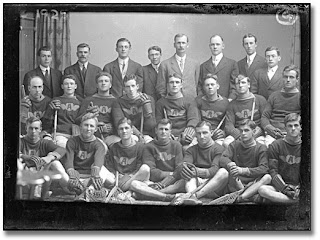 The youth Lacrosse team that I coach has their second game today against Ridley. We had a great practice this week. Most of the boys are playing for their Middle School teams as well as for our team so thay are getting a lot of playing time and stick work. We should make a good showing in this outing and I hope to get another win and see the kids aquire more field sense, get more confident with their skills and have fun.
Lacrosse has obviously been around for a long time...as evidenced by these vintage pictures...that's Jim Brown when he played for Syracuse. Legend has it that he often stated that he liked Lacrosse more than Football. As you may know the Game was originally played by Indian tribes(as depicted in the painting at the Blog Header.)
I read a statistic in The New Yorker that in the early 80's (when I played in High School) there were only about 8,000 to 10,000 kids playing Lacrosse nationwide. Today nearly 500,000 kids are playing. The sport has exploded. In fact, in today's lax climate I tend to doubt I would have been recruited as I was. Actually, one of the cross roads of my life was when I was offered a spot at West Point to play. I had gone to lacrosse camp there in the Summer between my Junior and Senior year of High School. The USMA Coach called me in September and said he wanted me to play for him and would arrange the Congressional appointment. I requested a week to think about it...then I politely declined. I just could not see myself commiting to 4 years of Army service after College....not to mention I was not certain I had sufficient desire for the Academy to endure Beast barracks. We were at Camp at West Point in July and saw first hand what the Plebes are subjected to in the first weeks. I much preferred the vision of guzzling cheap beer at Fraternity parties on the Hill at Lehigh.
In any event, I am still in love with the Sport and thoroughly enjoying watching my Son have the same experience.
Posted by Main Line Sportsman at 1:21 AM

Liberty and In Dependence said...

Played lacrosse when young and attended lacrosse camp in Connecticut. I notice that lacrosse is even exploding here in SoCal.

I had no exposure to Lacrosse until I arrived at Washington & Lee where it was THE sport. Coming from a large southern college, it was amazing to see the stadium 1/3 full for a football game and overflowing for lacrosse! I fell in love with the game.

The fastest sport on two feet.

...and JB was an All-American Lacrosse player.