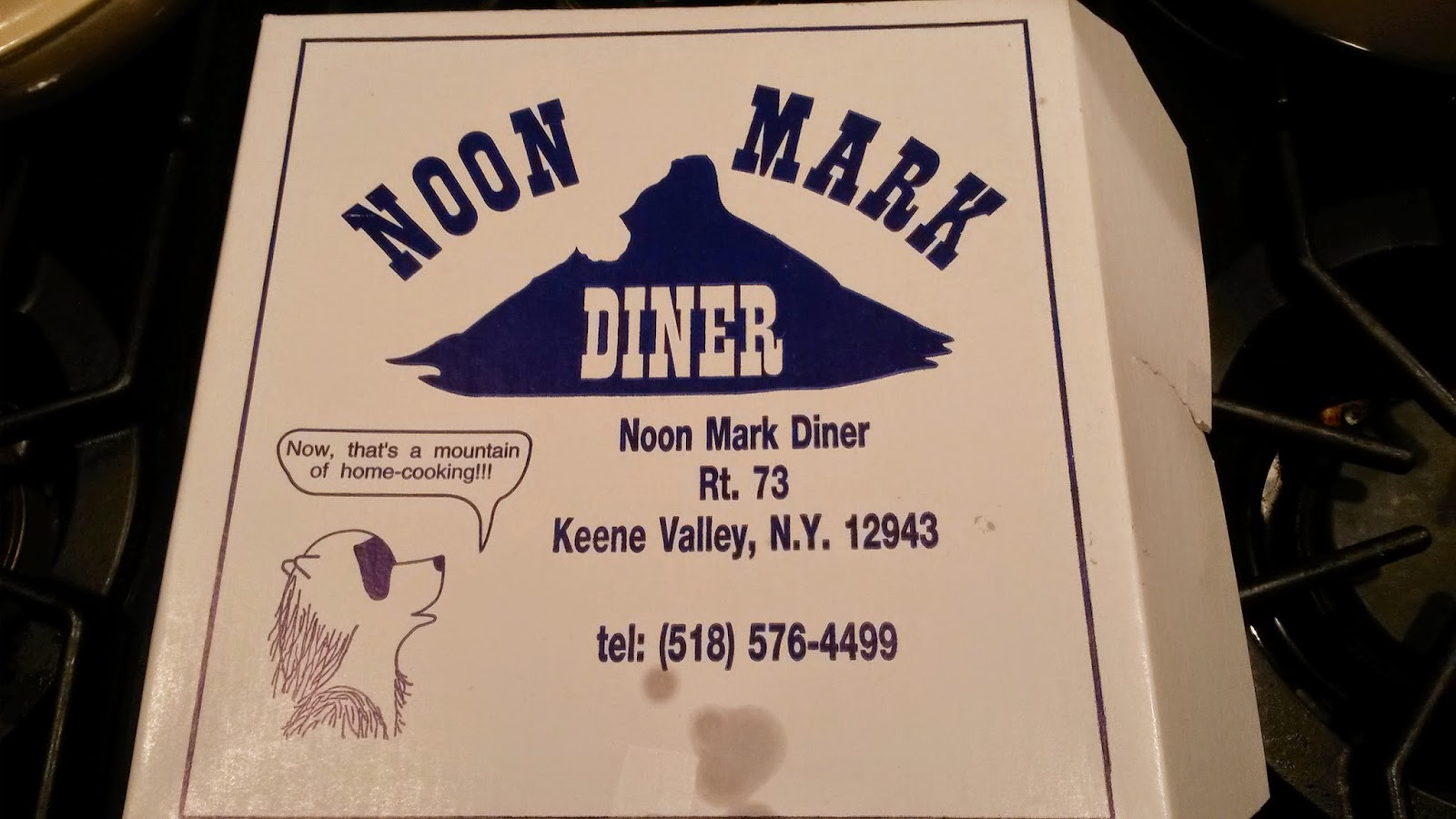 My wife went up to Burlington,VT this week to visit our daughter and then head across Lake Champlain to visit our North Country friends in Saranac Lake. While I was toiling in my law office and trying to get my fighters credentials squared away for his upcoming bout at Mohegan Sun casino on October 3rd, and taking my son for a college visit at my Alma Mater, she was hiking and canoeing and mountian biking and enjoying the Fall in the Adirondacks. 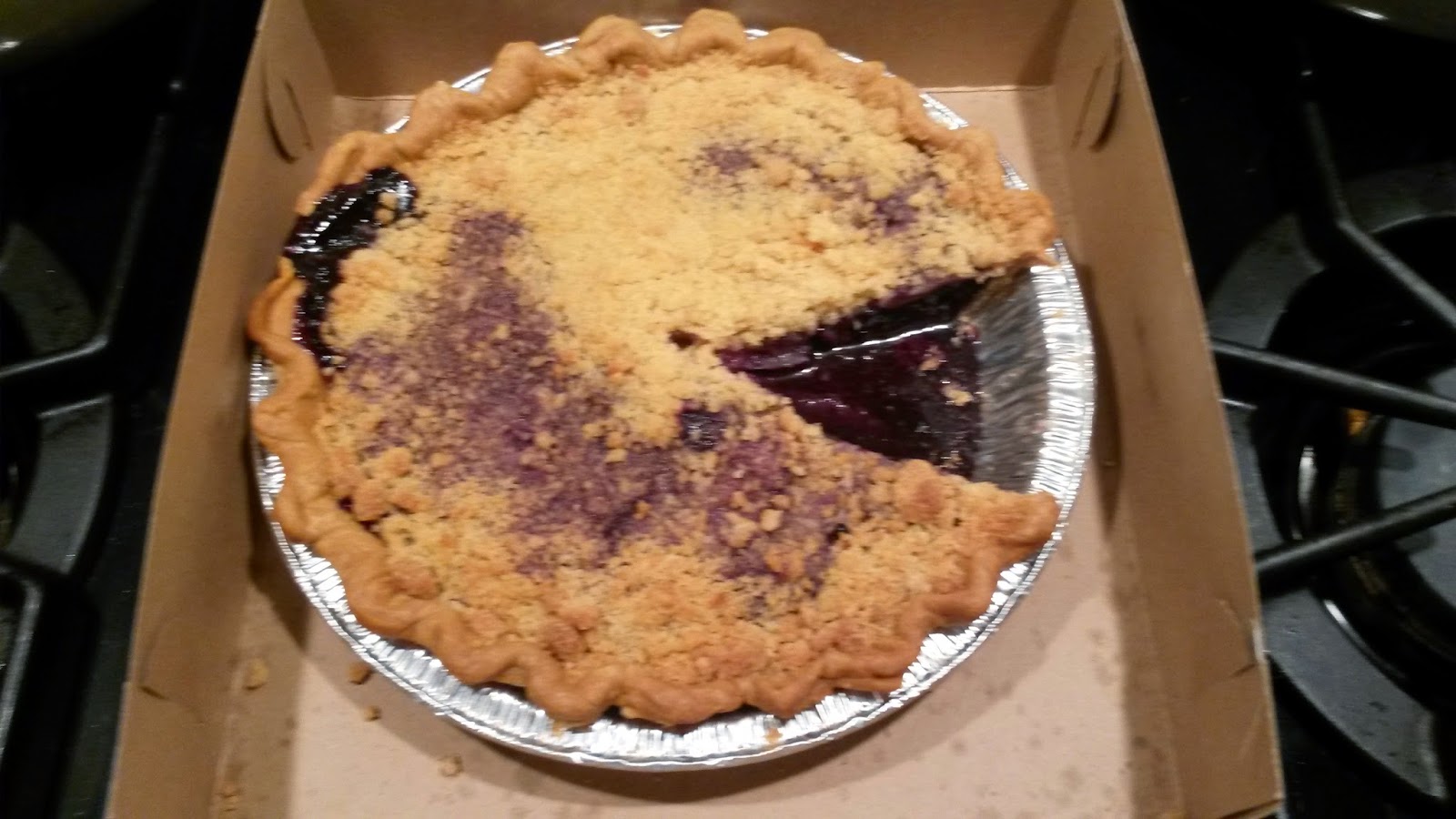 Her penance for leaving me to deal with the day-to-day at home while she was surrounded by the Autumnal splendor of the High Peaks, was to stop at the Noon Mark Diner for pie. She was instructed to purchase and bring home a Blueberry crumb pie. This little joint in Keene Valley, New York bakes the best damn blueberry pie on the planet.During the Summer, the diner does brisk table and counter business...but the bake racks in the back of the store are filled with Apple crumb, Maple Walnut, Raspberry-Rhubarb, Blackberry-Apple....a cornucopia of pie for which one runs out of superlatives.The pie noted above made it back to the Main Line intact and was enjoyed right away!
Posted by Main Line Sportsman at 12:27 PM 1 comment: Links to this post 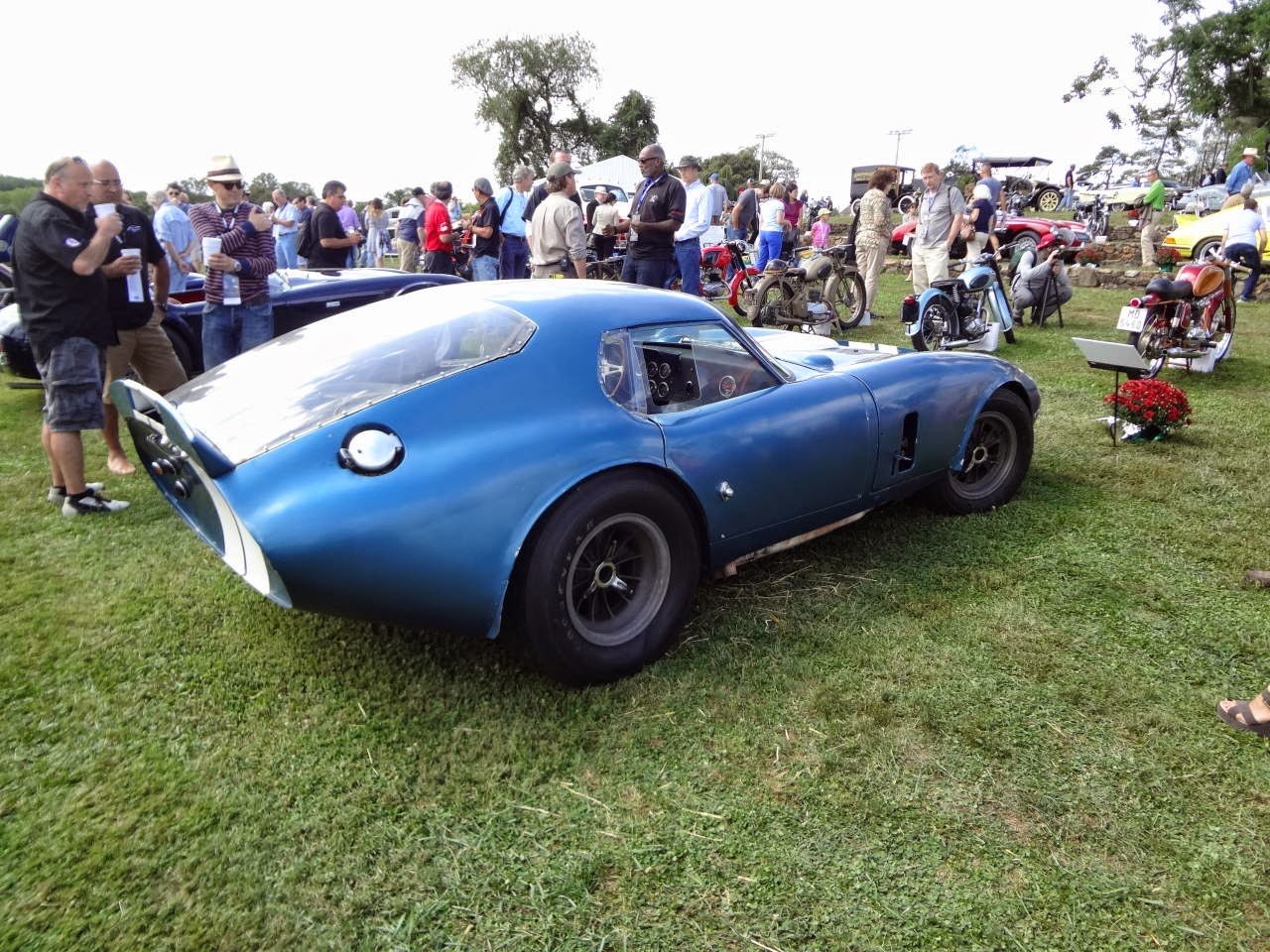 According to my extremely knowledgeable friend who is an expert in such matters, this item is probably the most rare and valuable American made vehicle on the planet. One cannot see from the photos, but the roof of this smokin' hot Ford-powered pavement pounder is signed by Mr. Carol Shelby himself. 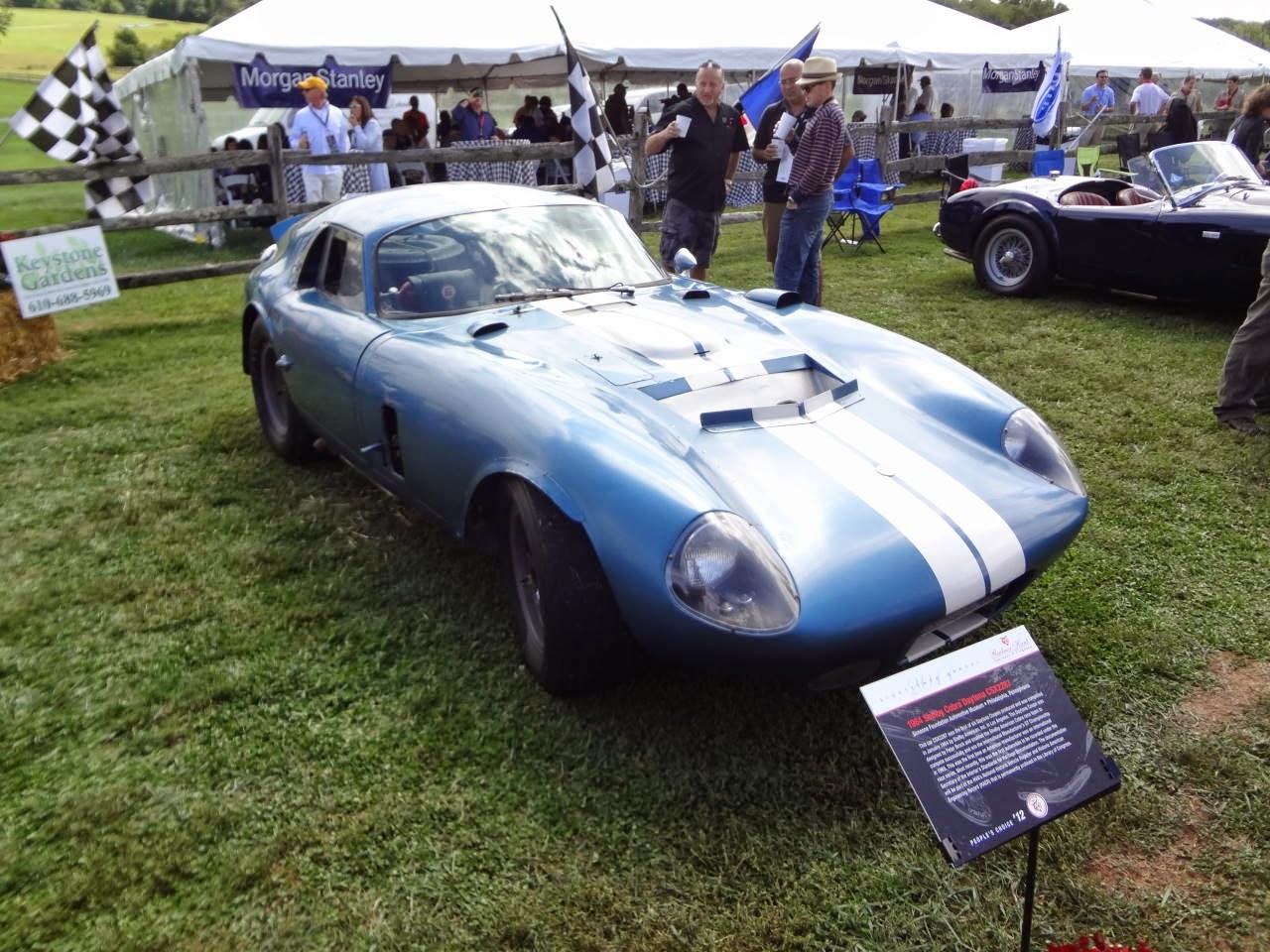 This is not a pretty elegant cruiser like the Rolls featured here in the previous post...but it is a speed record setting and race-winning one-of-a-kind. 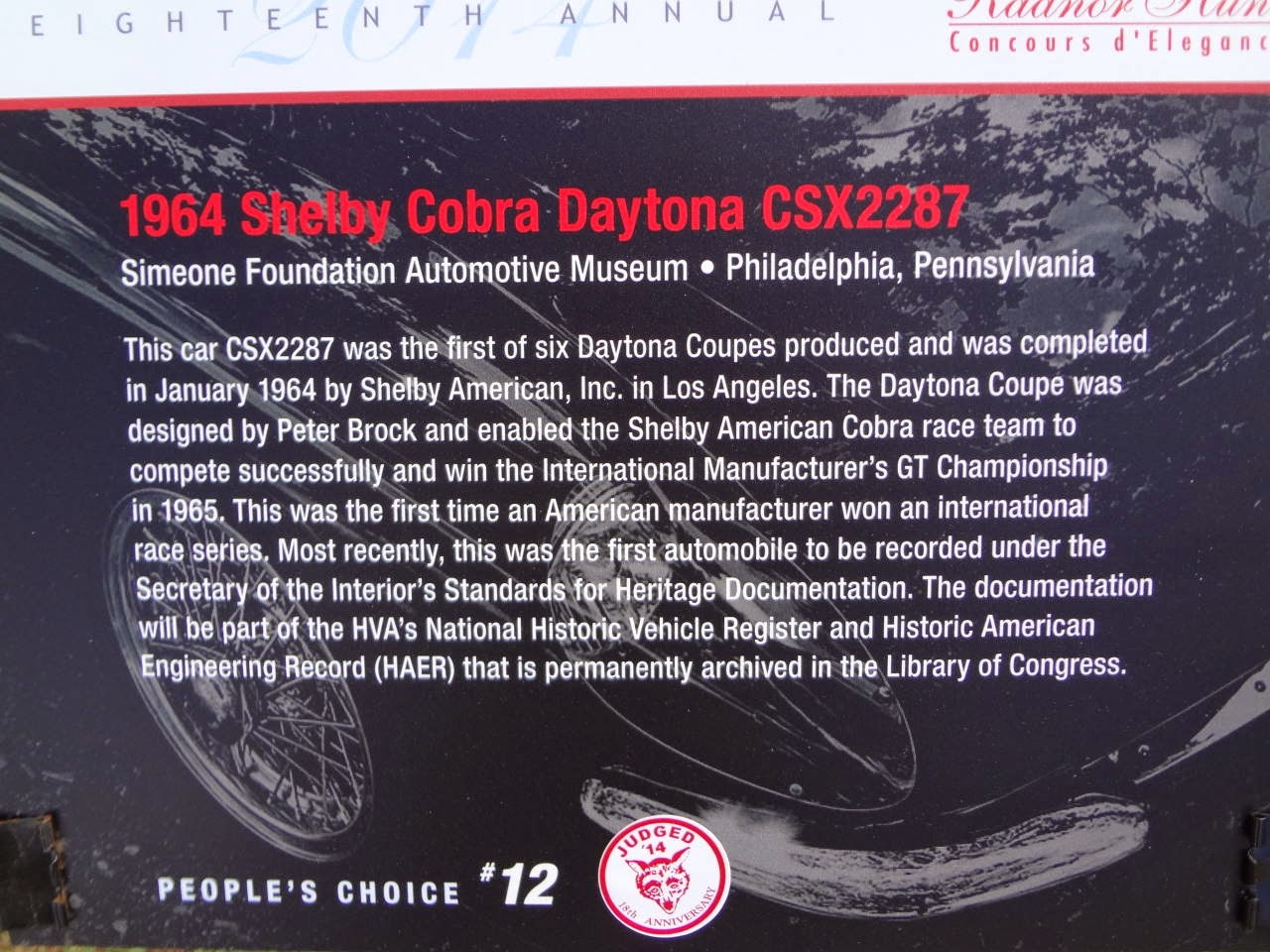 By the way....do some research on Dr. Simeone...this is one of his collection. He is a local neurosurgeon and one of the most amazing collectors of unique and important  cars in the world. His museum/foundation is here in Philadelphia and is worth a visit if you can get access.
Posted by Main Line Sportsman at 7:03 PM 1 comment: Links to this post 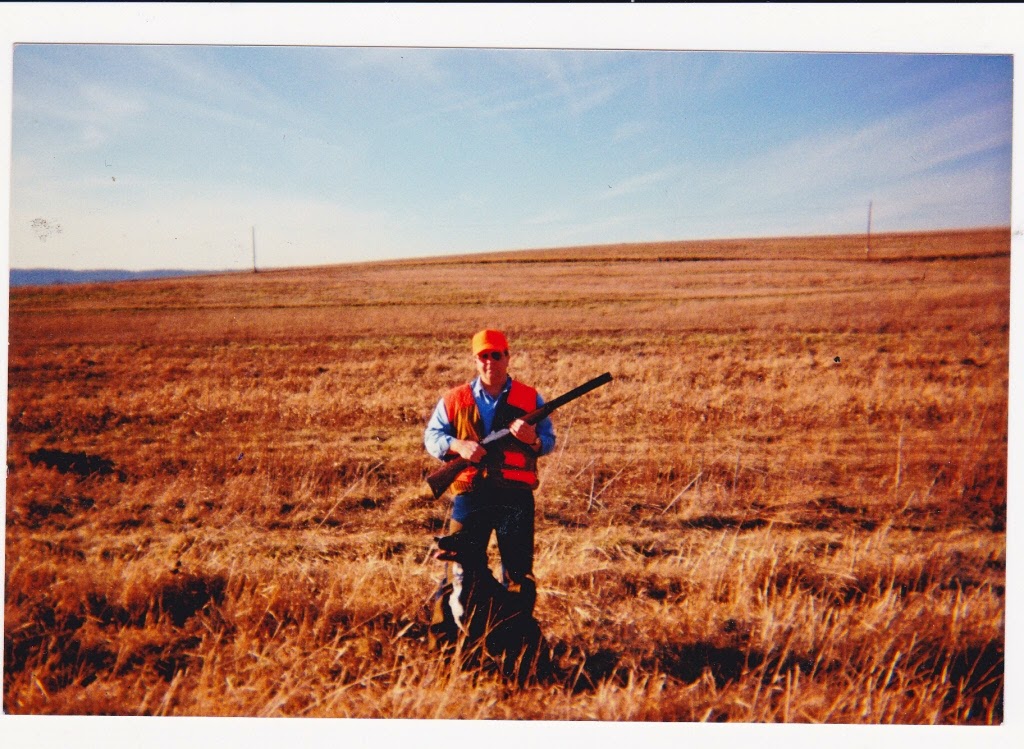 A sad forecast from the NYT. Similar news was reported this week in Mid-West publications as small game season approaches. Above is a picture of this writer and his faithful upland game dog Archie. Archie is retired now as he is 14...but damn was he a pheasant hunting machine in his prime...and a 1/2 lab-1/2 English Setter mutt that I saved at a rescue shelter

The pheasant, once king of Iowa’s nearly half-a-billion-dollar hunting industry, is vanishing from the state. Surveys show that the population in 2012 was the second lowest on record, 81 percent below the average over the past four decades.
The loss, pheasant hunters say, is both economic and cultural. It stems from several years of excessively damp weather and animal predators. But the factor inciting the most emotion is the loss of wildlife habitat as landowners increasingly chop down their brushy fields to plant crops to take advantage of rising commodity prices and farmland values.
Over the last two decades, Iowa has lost more than 1.6 million acres of habitat suitable for pheasants and other small game, the equivalent of a nine-mile-wide strip of land stretching practically the width of the state. And these declines have been occurring nationwide.

Each of the top seven pheasant hunting states have seen sizable reductions in the number of pheasants shot and the number of pheasant hunters over the last five years, according to data provided by Pheasants Forever, a group advocating for the expansion of wildlife habitat and land for public hunting. Last year, there were more than 1.4 million pheasant hunters nationally, a drop of about 800,000 in two decades.
“We’re at a tipping point, and we have to decide how important it is to keep traditions for upland bird hunting alive and into the future,” said David E. Nomsen, the vice president of government affairs for Pheasants Forever.
Federal wildlife officials say the money that sportsmen and -women pump into the local communities is vital. More than $33.7 billion was spent on hunting in 2011, including $2.5 billion on small game, which includes pheasants.
“In these times of fiscal restraint, when budgets are being slashed, we need to do all we can to make sure hunting and fishing remain viable pastimes,” Daniel M. Ashe, the director of the United States Fish and Wildlife Service, said in an e-mail.
In Iowa, the issue essentially has pitted the interests of the state’s recreational industry against its biggest economic driver, farming.
Among farmers, “it’s being passed down, from generation to generation, ‘How much can you get out of this land?’ ” said Mr. Wilson, the pheasant hunter, a 49-year-old former naval officer who hunts about three times a week. “ ‘Yes, you’ve got to take care of it — blah, blah, blah — but how much can you make for your family out of this piece of land?’ It’s not about ‘Is little Billy going to grow up to be a hunter?’ anymore.”
Bruce Rohwer, the president of the Iowa Corn Growers Association, said he believed that farmers were as concerned as ever about being good stewards of the land and allowing natural habitats to bloom where they would prevent soil erosion and water contamination. But farmers also have to contend with economic realities, he said.
“As much as some people have romantic ideas that farming is just something that happens,” he said, “it is the way in which we make a living, so you have to consider all factors.” 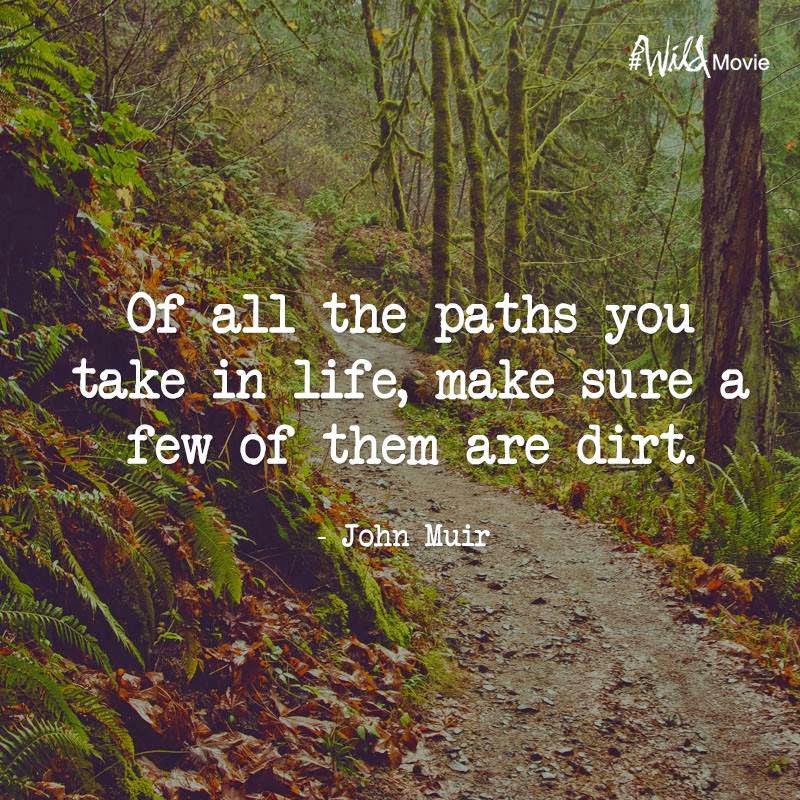 Posted by Main Line Sportsman at 5:46 PM No comments: Links to this post 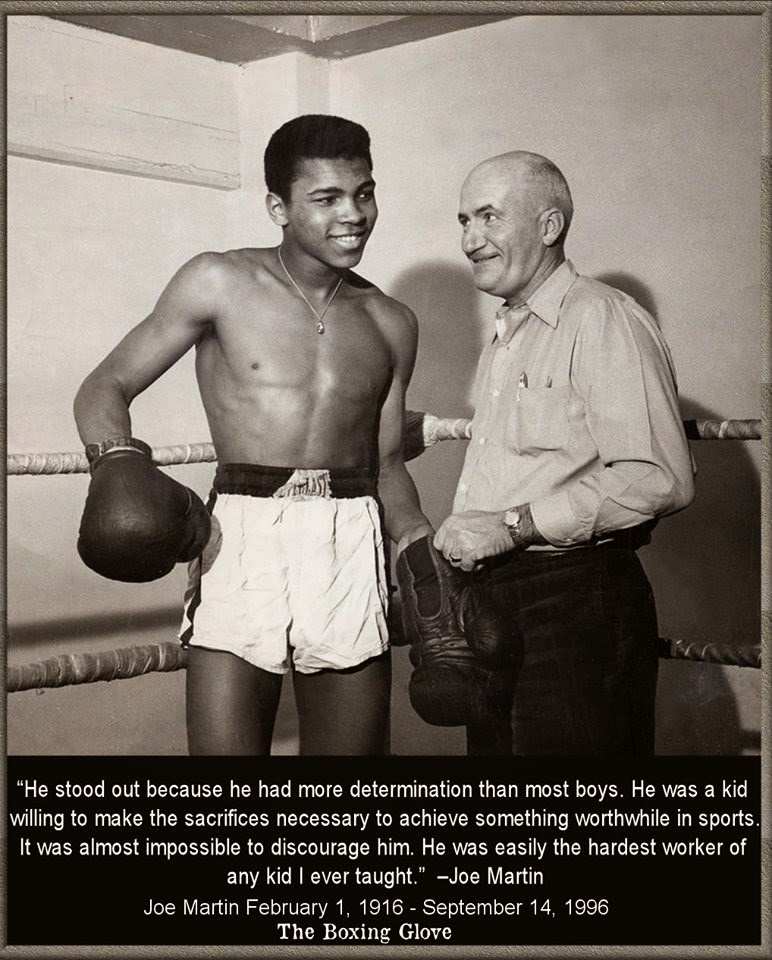 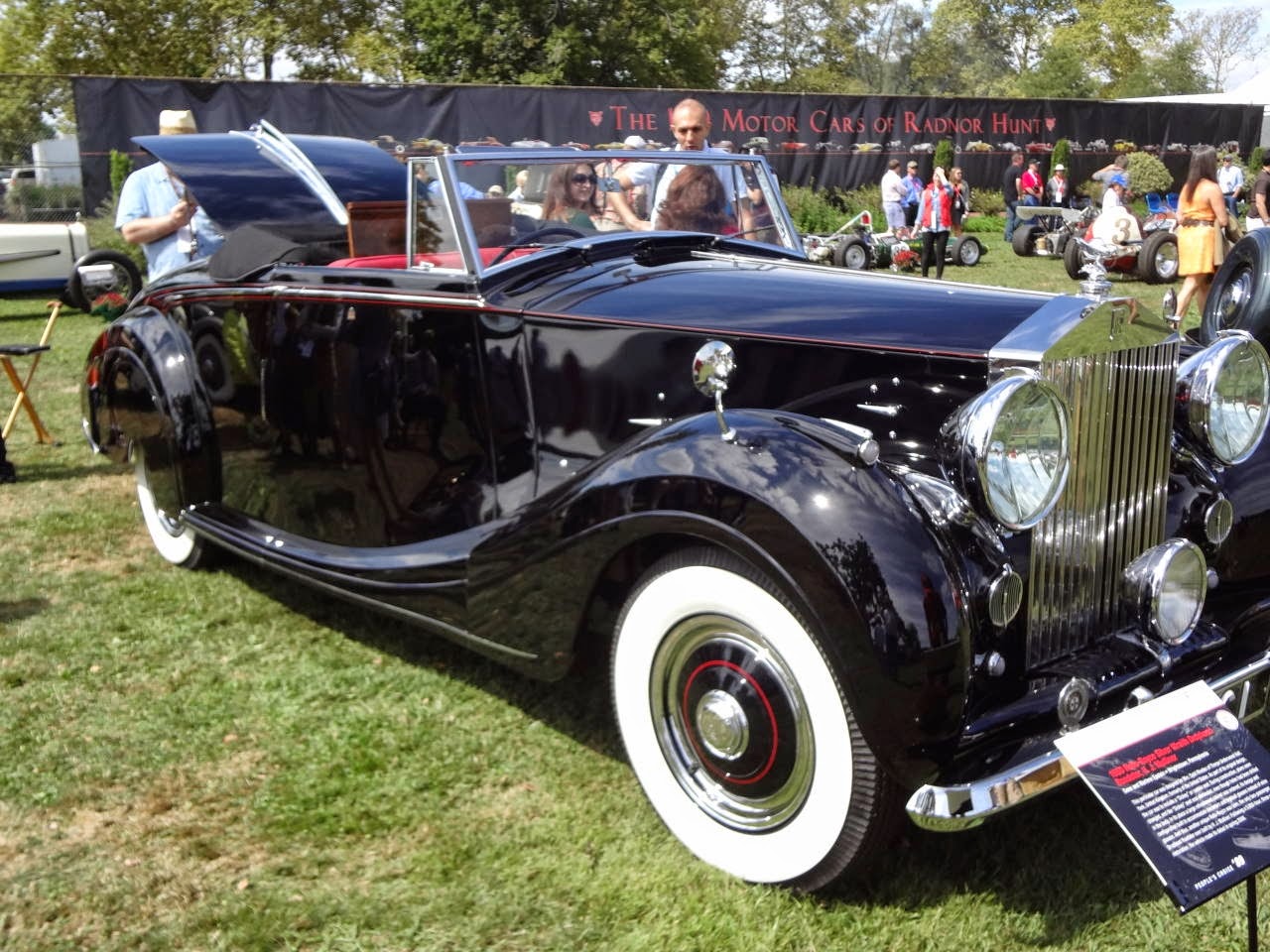 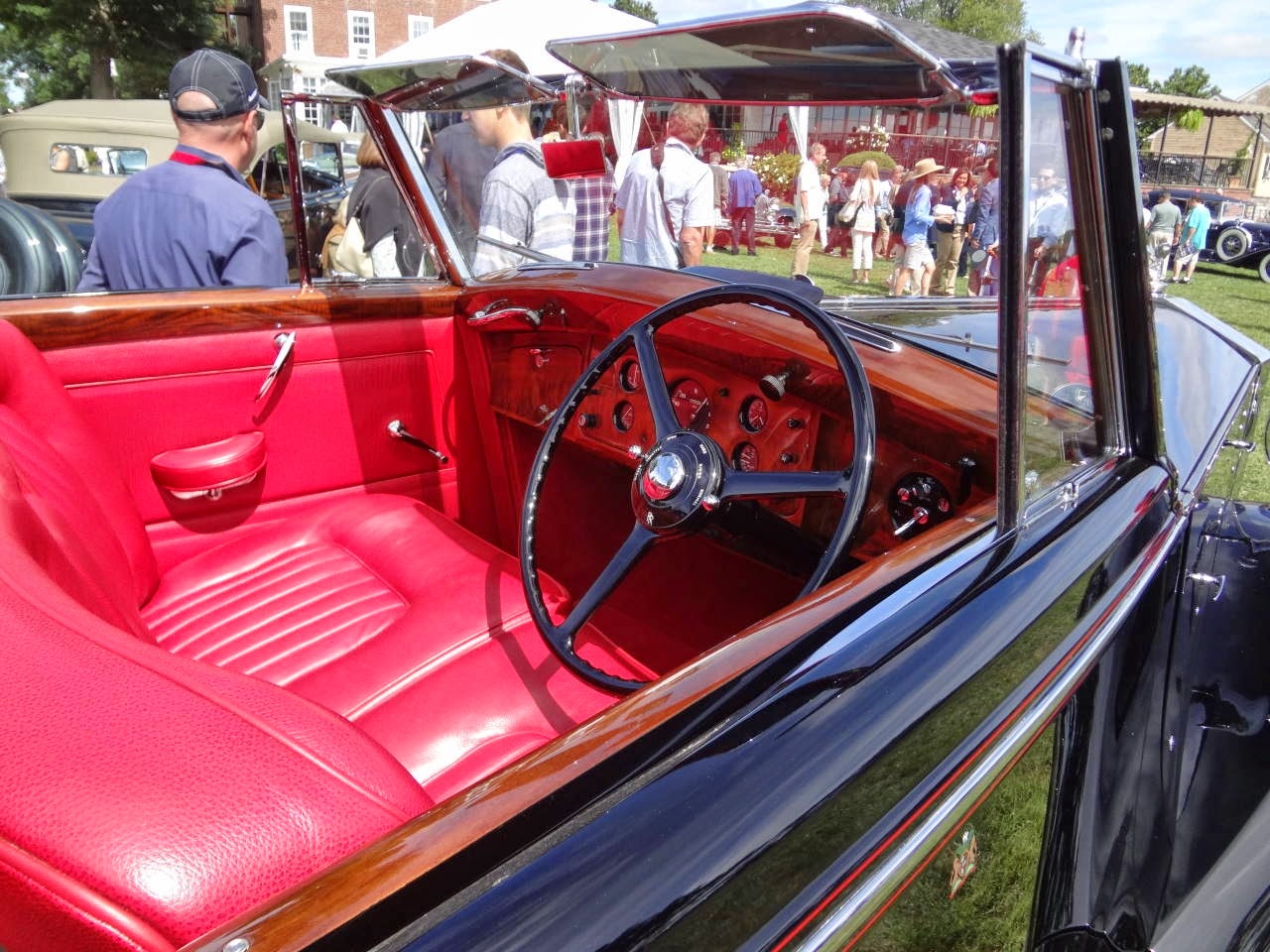 But in the realm of automobiles, form and function and wood and metal also provide a confluence pleasing to the eye and our practical nature 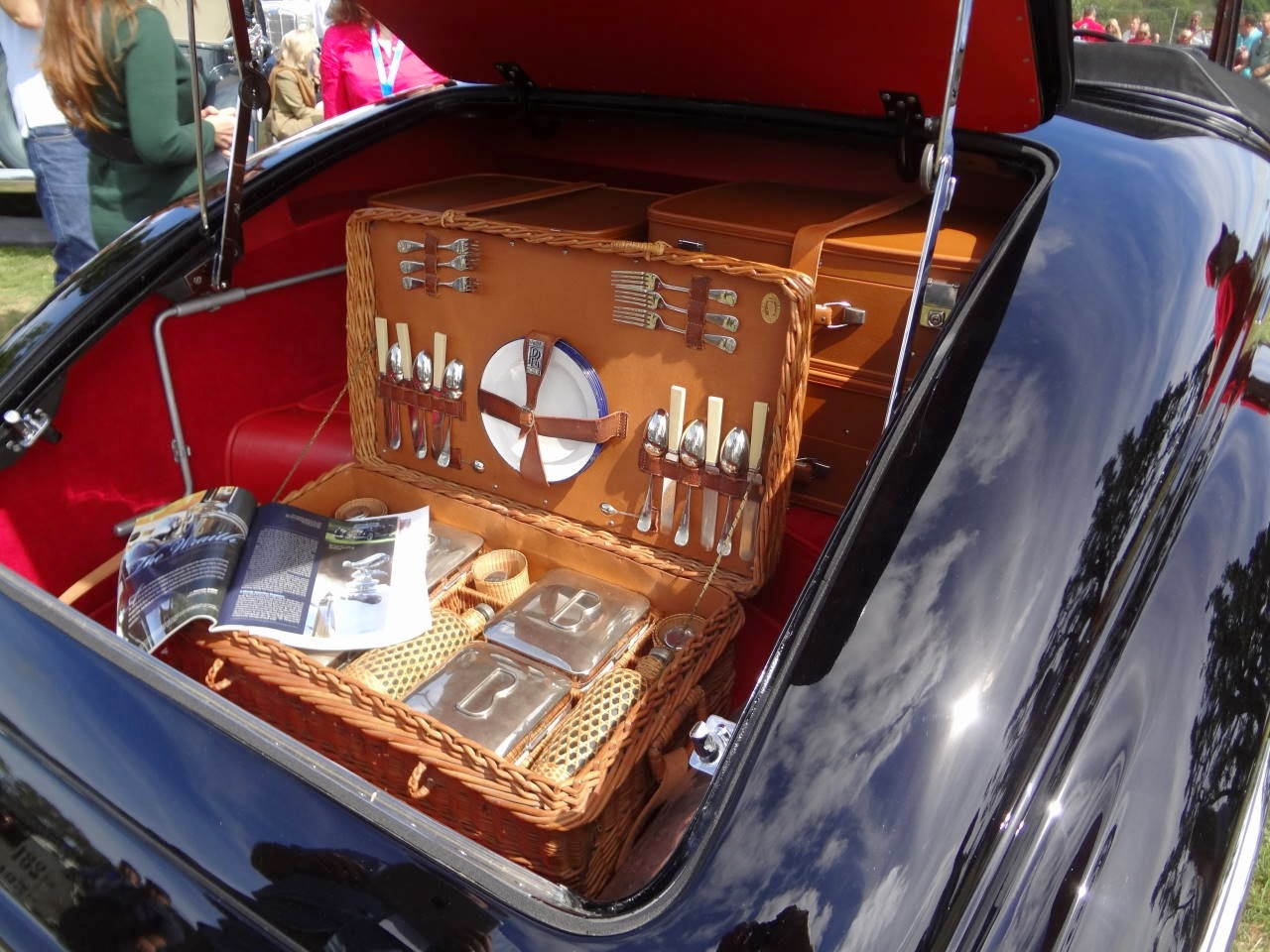 This 1950 Rolls Royce was featured at the 18th Annual Radnor Hunt Concours d'elegance. I was rendered speechless by the beauty of this fine auto. I was equally impressed with the content of the trunk which included a custom picnic rig. 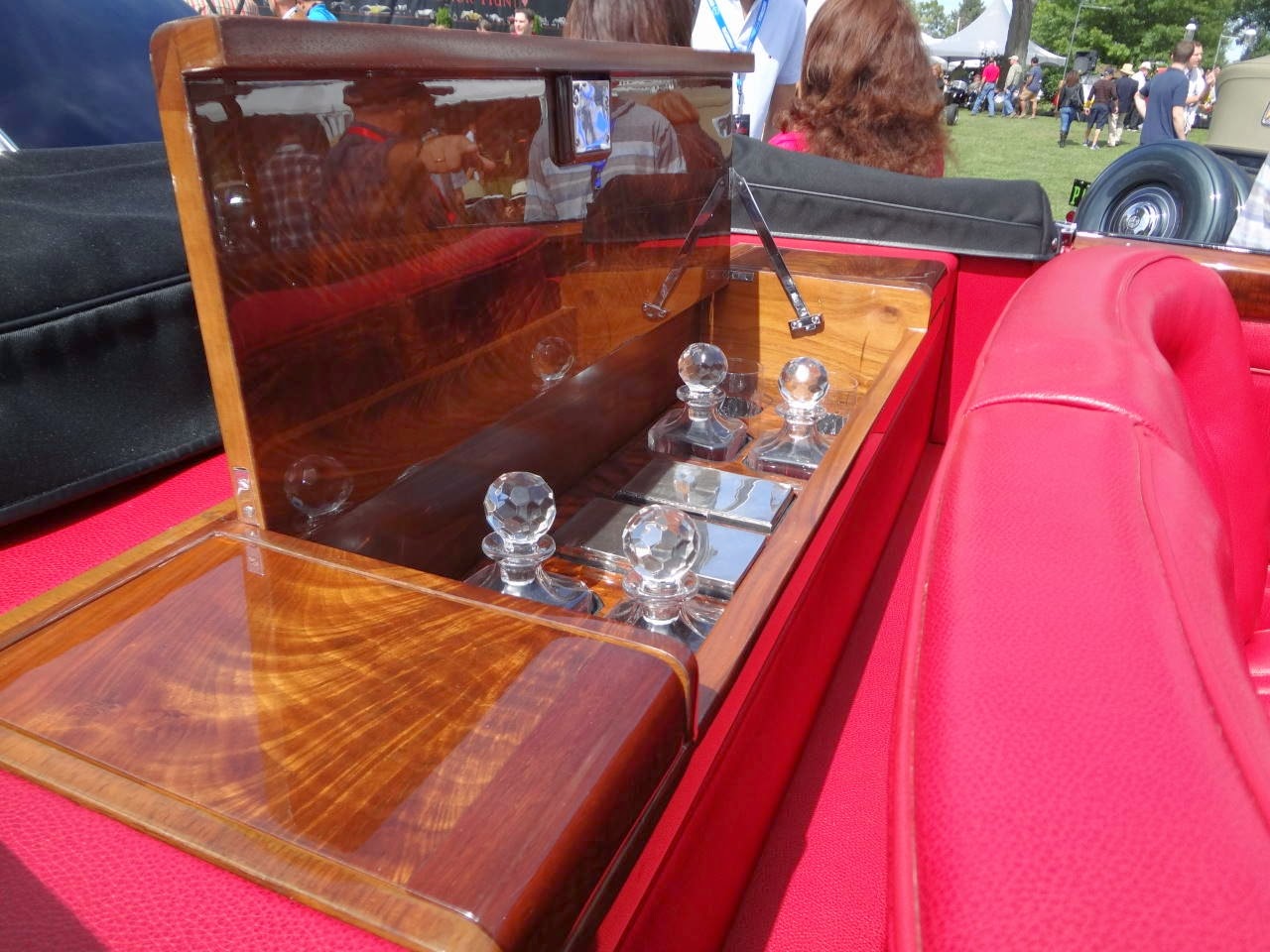 What was really unique,indeed something I have never seen in one of these vehicles...was the mobile custom bar designed into the space where the rumble seat would otherwise be found. 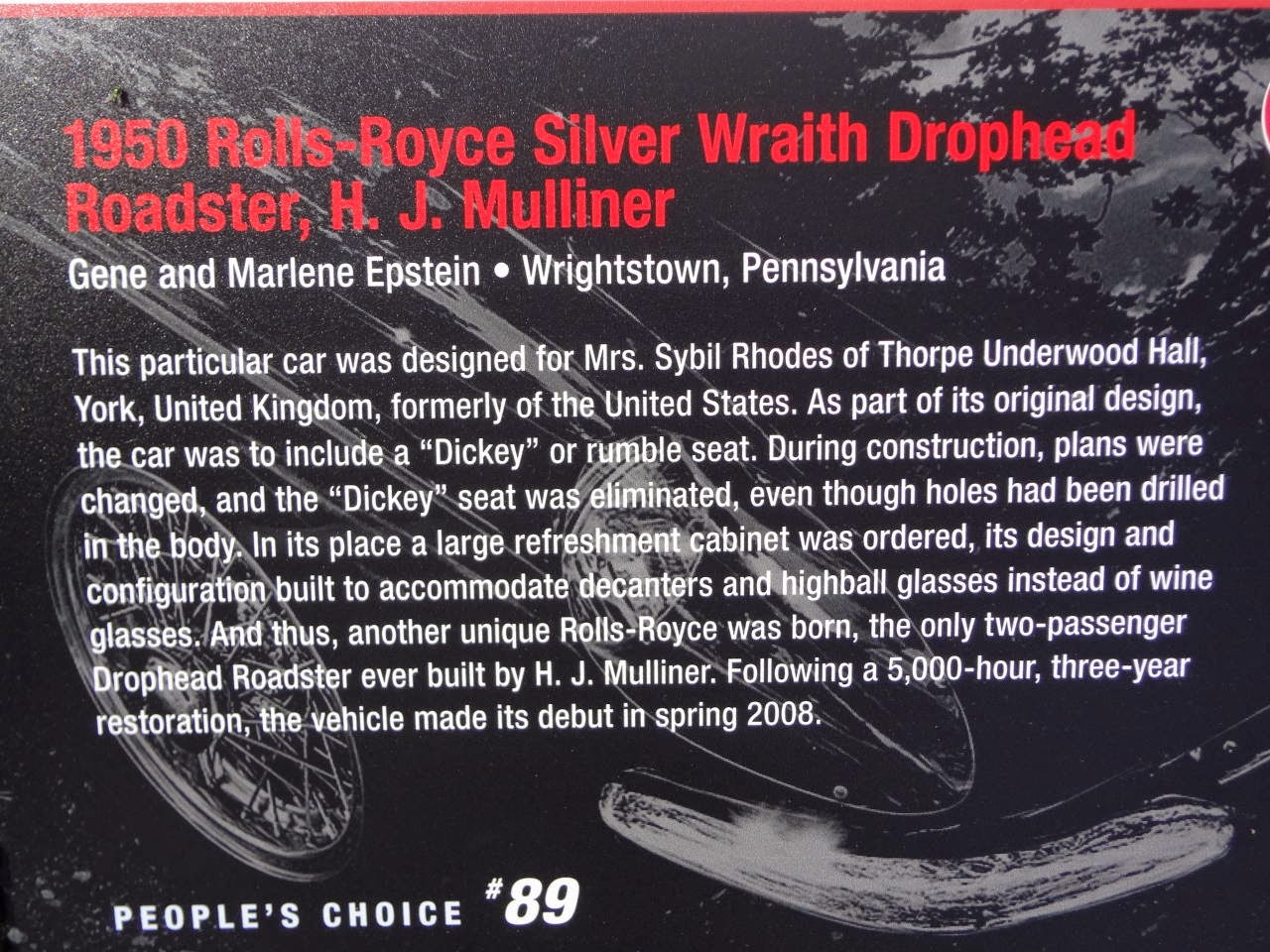 My wife and I had a great afternoon wandering the grounds of Radnor Hunt Club and marveling at the restored vehicles of all eras and classes. More to follow.
Posted by Main Line Sportsman at 5:13 PM 1 comment: Links to this post 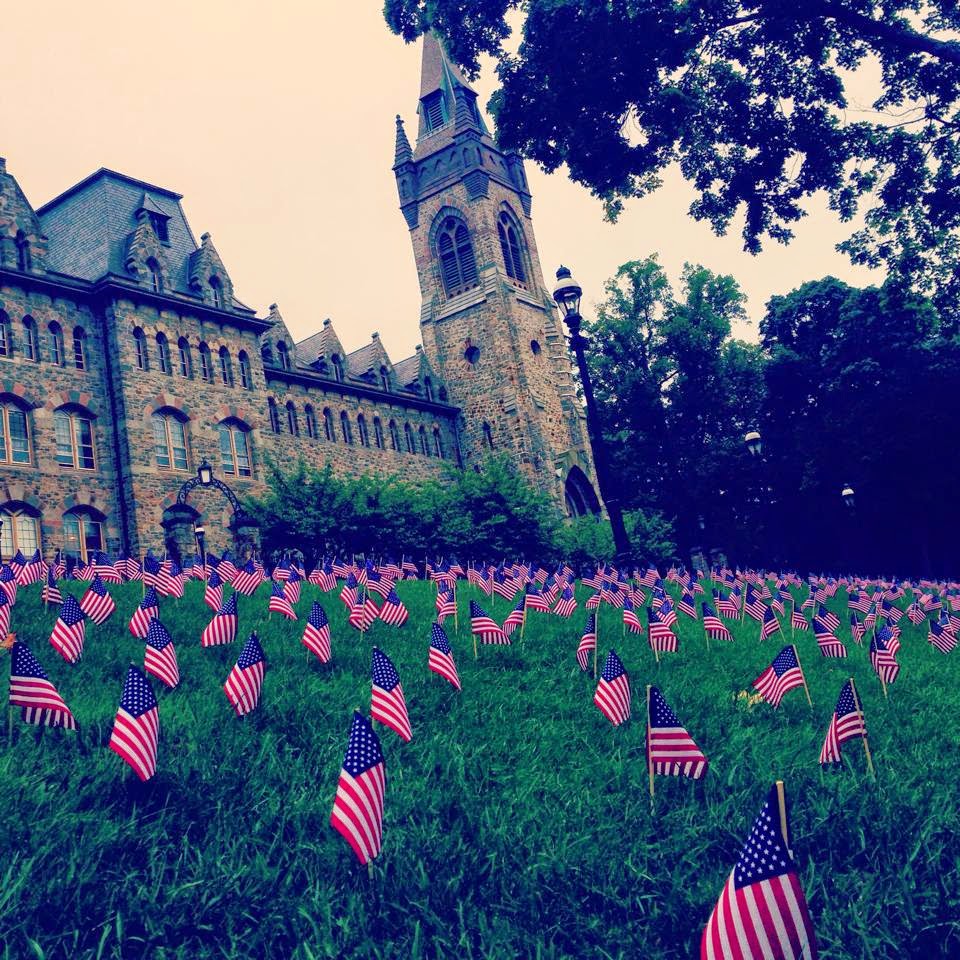 The lawn at my Alma Mater....2,977 flags in remembrance of the souls lost this day 13 years ago.
Posted by Main Line Sportsman at 11:22 AM No comments: Links to this post 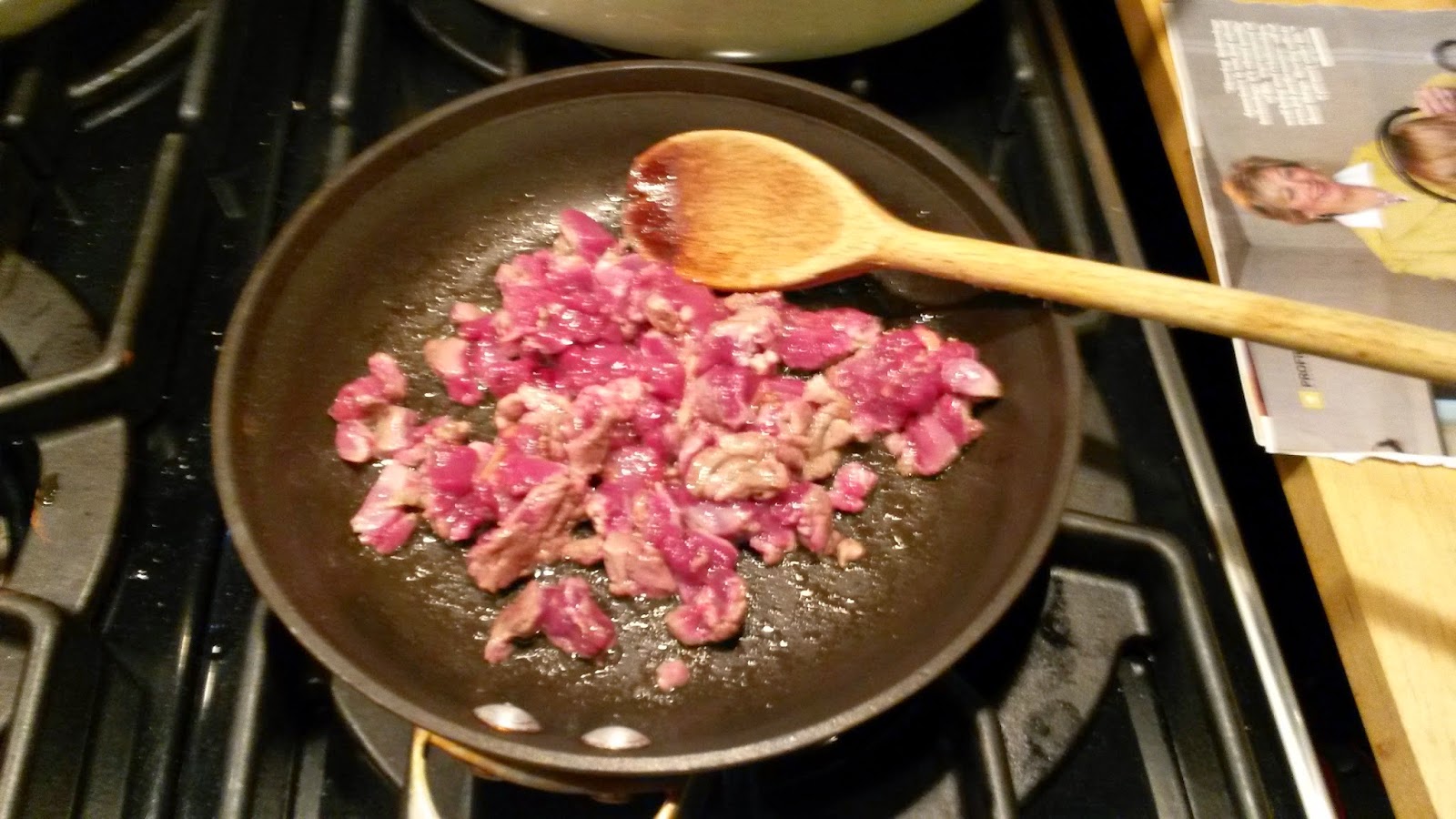 Ultimately, after all the preparation and the placement of decoys and the time in the field, it becomes about the eating.
On Friday afternoon and Saturday morning I positioned myself back in the field of sunflowers at the hunting club. This is "the dove field."
I had more success than on opening day and shot a few fat healthy birds.
Said birds were cleaned and put on ice Saturday afternoon.
Last night I made dove breast empanadas from my harvest. I winged the recipe (no pun intended) and sauteed some shallots and then added the chopped breast meat. Then I added 2 large tablespoons of peach-pecan jam I had purchased in Vermont at Dakin farms on the last trip to UVM to pick up my daughter.
I reduced liquid and then cooled the mixture. After folding the cooled meat into circles of Pillsbury crescent roll dough and baking...these delicious appetizers were a huge hit during cocktails before dinner.
Posted by Main Line Sportsman at 11:59 AM 1 comment: Links to this post 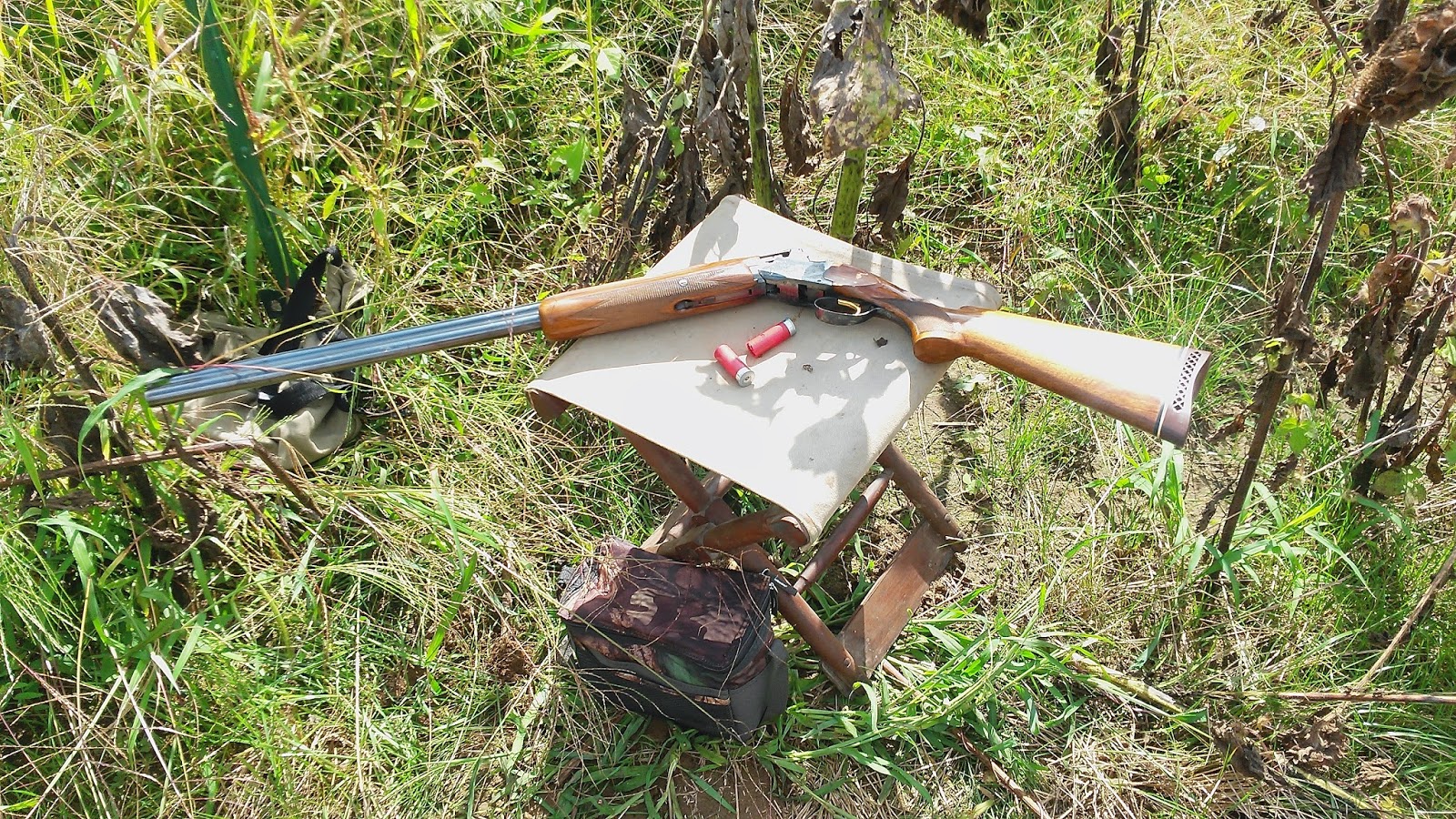 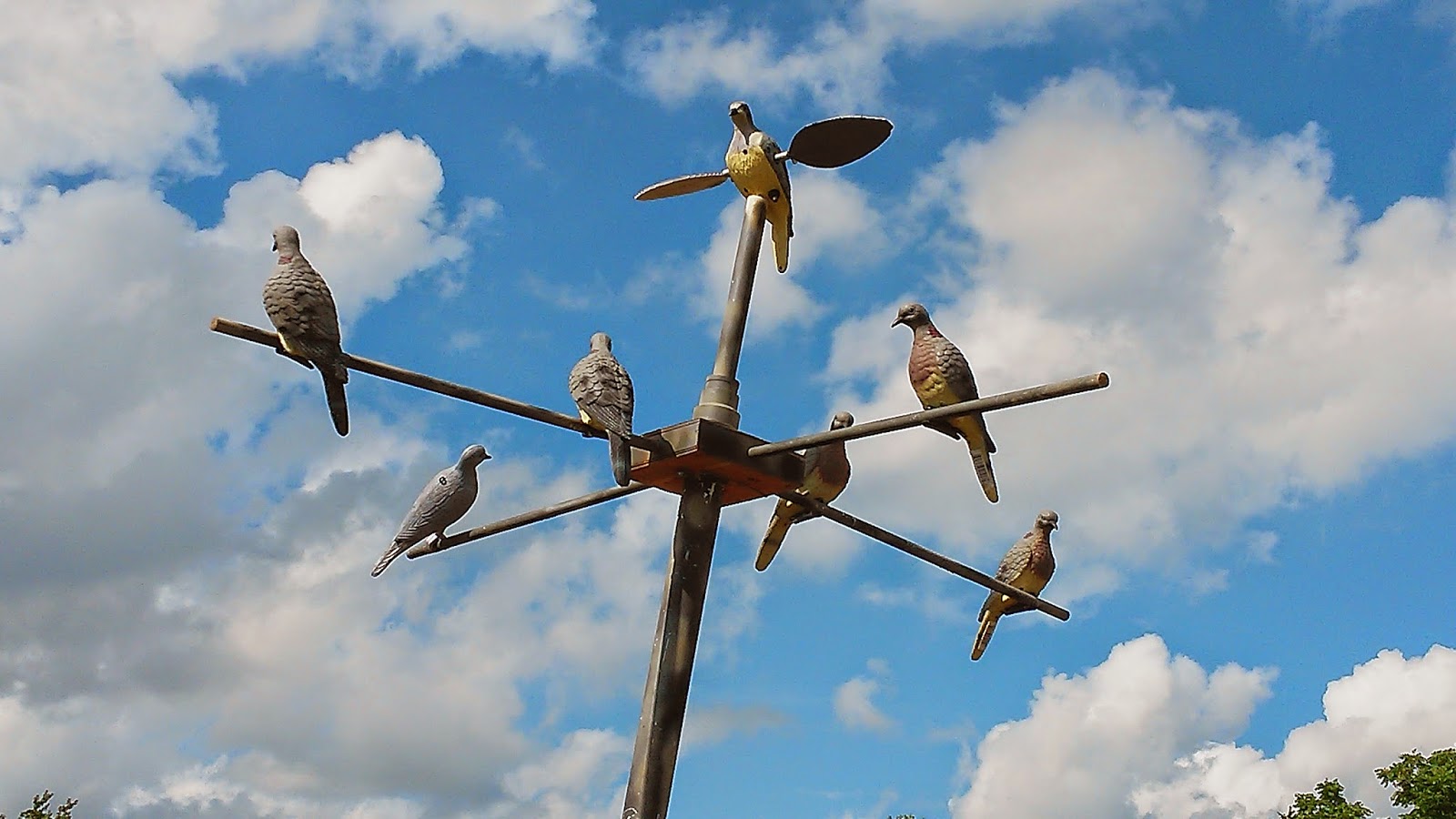 The sweat poured and the birds did not fly often or in great numbers. 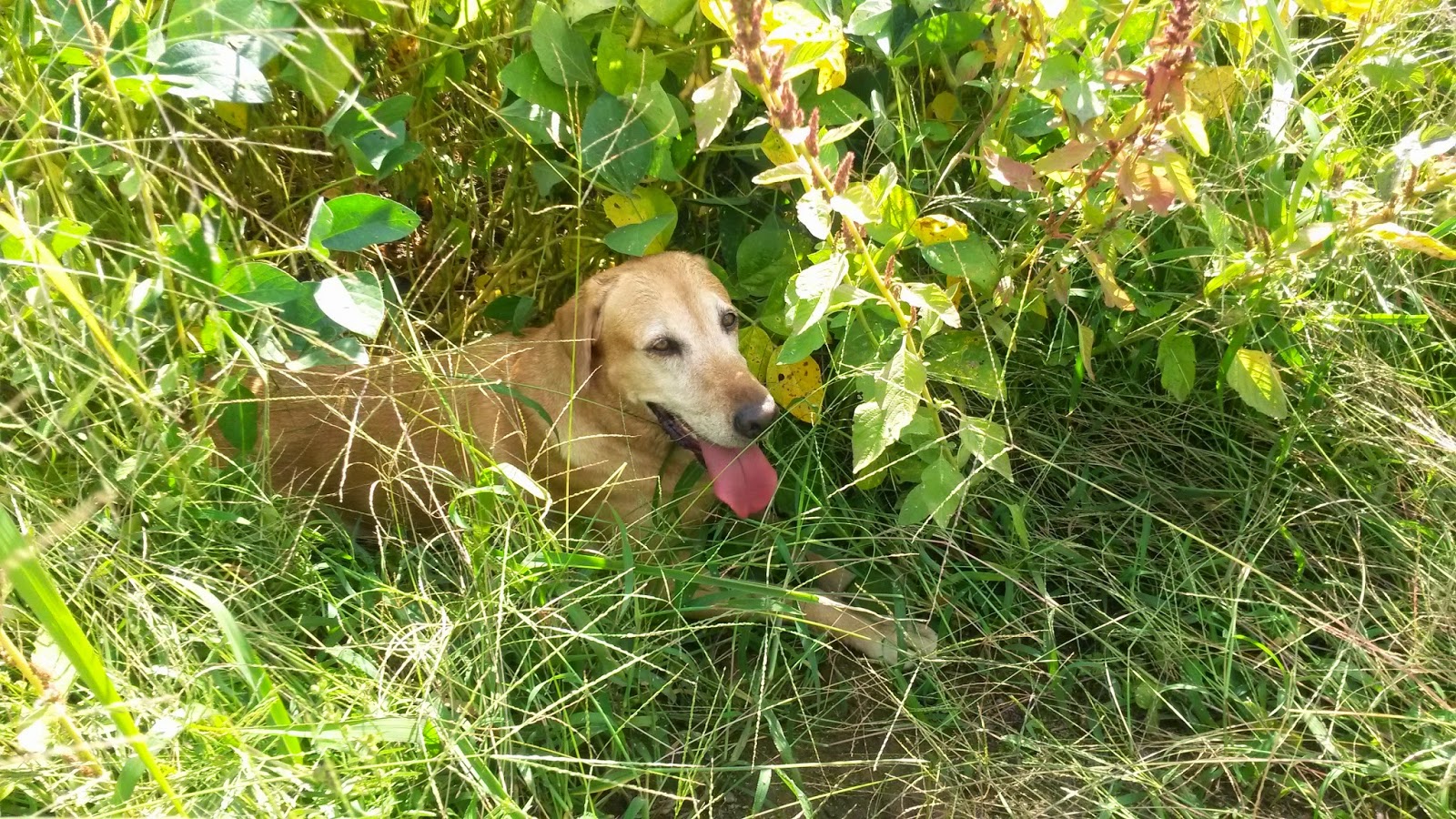 My girl Genna sought refuge from the sun throughout the day in the soybeans. Usually at our club we limit out on doves in a few hours....this day one was lucky to bag 3 or 4 and miss a few. It was a fun day in the field with the guys nonetheless.... and the beers after the hunt were icy cold and welcome beyond measure. But there was not much to put on the grill.
Posted by Main Line Sportsman at 2:51 PM 1 comment: Links to this post

Posted by Main Line Sportsman at 11:43 AM No comments: Links to this post