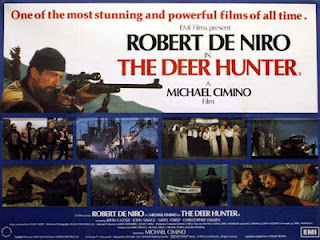 I remember seeing this movie the day after Thanksgiving 1978 at the Ritz 5 theatre in Philadelphia. I went with one of my brothers and one of his buddies. The thing I recall most is that when the movie was over and the sold out theater emptied onto the streets pf Philly, everyone was absolutely silent. The movie was so powerful and made such an impact on the audience that no one said a word. 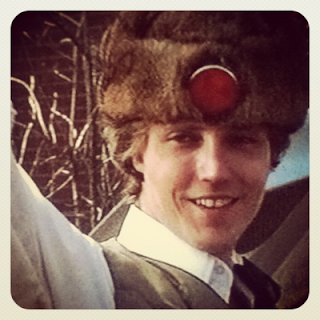 I have watched "The Deer Hunter" countless time since then. It is still a great movie and the cast was an early round-up of our generations elite actors and actresses. However, each time I have watched it over the last few years I have noticed some anachronisms or technical flaws that I cannot ignore. 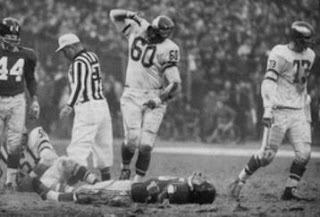 First, when the movie begins it is dark outside the Steel Mill in Western PA town where the characters live. The camera then takes us inside the Mill to the end of the shift for Mike, Stan, Stevey,Axel and Nick. They change and leave the mill in early morning light...we thus assume they were on a 12-8 shift. Nick states he is "buying beers this morning" and they head to the bar owned by their buddy John. When  they enter the bar the Eagles/Steelers game is on TV.  It is a breach of continuity and an apparent error to have an NFL game on TV at that time of the morning. Further, Stevey is getting married that evening so chances are it was a Saturday....(pretty rare for Eastern Orthodox Christians to get married on a Sunday)....Sunday was NFL game day of the 60's. So what the Hell were the Eagles doing on TV and what was the director's point here...the only reference to the game is Nick making a silly wager about the Eagles getting past the 50 in the second half. 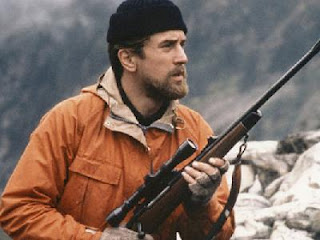 Now we turn to the fairly sloppy job done by the director and whatever technical advisor he used during the film. Specifically, the deer hunting scenes and content.The movie is titled "The Deer Hunter" for chrissake.First, as they are leaving the plant, Stevey exclaims with surprise " I'm getting married tonite...you guys are goin' deer huntin' tonite?" If we assume it was a Sunday...NFL Game Day based on the game on TV in the Bar...then  the following day was Monday...the tradtional opening day for Deer Season in Penna. Forgetting the fact that NO hunter in PA in his right mind would schedule a wedding to conflict with the sacred eve of opening day....no man in a rural PA town would question the fact that his boys were going hunting or seem surprised since he knows these guys are deer hunters and one assumes he is a hunter as well.

Next, we have the rather absurd costumes worn by the hunters. Nick goes hunting with a fur cap....potential suicide in the dim dawn light of the PA woods during deer season. The guys head could look like a deer's ass to a hunter a hundred yards away...and BANG...we do not have to wait for Nicky's self administered bullet in the head later in the film. No hunter wears a fur cap to deer hunt....ever. To add to the lack of realism, Nick has a reflective driveway or bumper badge pinned to his hat. Any deer within one thousand yards of Nicky and his rifle would bolt upon seeing some early morning light reflecting off that button...simply and absurdly unrealistic.Nick wears NO orange for safety. Mike does wear an orange coat...an attempt to add realism to a big game hunting scene in the Northeast....but it is a dull orange...not "thousand yard" cloth which can be seen by fellow hunters and be the difference between a safe hunt and a .30-.30 bullet in the chest. Lastly, when Nick and Mike leave the cabin to hunt, it is quite light out. Deer hunters usually if not always leave for the hunt before sunrise so as to be in position when dawn breaks and the deer start to move. Given how great this movie is...I just wish they had a technical advisor who had some clue about deer hunting  in Pennsylvania...small details...but they become increasingly annoying with each screening of the film. Maybe I am being too analytical and need to, as William Hurt said in "The Big Chill"...let the art flow over me. 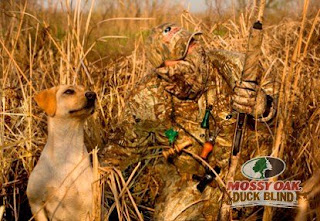 Duck Season opens October 26th. We are getting prepared. Remember...it is all about concealment.
Posted by Main Line Sportsman at 10:42 AM 1 comment: 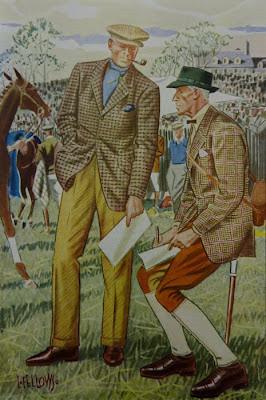 The Fall season of steeplechasing is upon us. Shawan Downs is 9/29 in Maryland and the International Gold Cup is 10/6 in Virginia. The Pennsylvania Hunt Cup is 11/4 here in southeastern PA. I suggest you buy a ticket and enjoy a day in the country...wagering, having a few cocktails and tailgating with friends. Most of these events benefit a worthy cause so you can engage in a bit of charitable giving at the same time.
For those who enjoy the betting, I suggest you visit the National Steeplechase Assoc. website before the meet...you can view entries for the races, jockey assigments, trainer's records, past performance and other useful info to help you pick a winner.


Posted by Main Line Sportsman at 12:54 PM No comments: 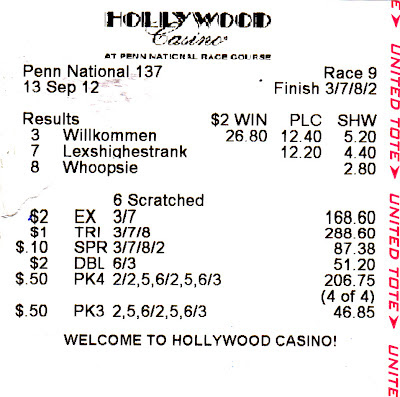 CLE is annoying and costly. CLE is the Pennsylvania continuing legal education requirement for practicing attorneys. Each year there is a 1 1/2 day seminar in Hershey,PA that affords an opportunity to bang out 7 of the needed 12 credits in one shot. This seminar is in my specialty so it works out well.
It also affords the sportsman a chance to hit the Racetrack. After the afternoon seminar and dinner with colleagues, I headed to Penn natinal racetrack...about a 20 minute drive from Hershey. Their racing card started early so I was only able to catch one race, but I knew I could throw some dice in the casino after the track went dark...there is a fairly nice casino attached to Penn National.
Featured above is the pay-out for the last race. having arrived with about 12 minutes to post time, I grabbed a Racing Form and studied the entries for the last race. The number 3 horse looked attractive and had past performances that showed him driving hard in the final stretch of his last races. He also carried a nice price at 12-1 and a quality Jockey. He looked game in the paddock as well. Now, betting at these 2nd rate tracks is always hit or miss and that is what makes the bigger pay-offs both attractive and possible. When a handicapper scans the Racing form for a big Grade I race...all the entries look so good it is hard to chose.
The 3 horse had a moniker that appealed to my Germanic heritage and my one-time semi-fluency in the language. Arriving at the window I told the gray haired gentleman at the terminal: " 5 across on number 3."
My 12 ounce cup of draft Yeungling and I went out to the rail to await the start. After a fairly good jump from the gate, No. 3 settled into the mid-pack. At the top of the Clubhouse turn he put on the jets and moved to the front. I spilled my beer cheering and Willkommen crossed the line in first by about a length. The $15.00 bet paid $111.00. Not a huge pay-off but I was elated at a one and done track victory.
I took the winnings to a $5.00 crap table...made a few passes including a sweet point on 6 with a diouble 3 with money on the hard-way. I sensed the table going cold after the next 2 shooters stunk up the joint so I de-camped and found a seat at Blackjack. After an hour or so of good and bad hands, and a few nice double down 21's on a 10...I left with a very healthy stack of chips, cahsed in at the cage and called for the car from the valet. Like my Grandad always said..."try to get out a winner."
Posted by Main Line Sportsman at 10:46 PM 4 comments:

Safety Tips for the Season 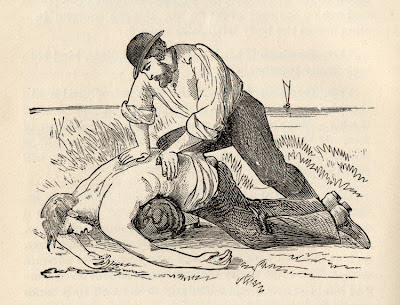 Waterfowl Hunter Water Survival Tips
.
Most drownings could have been prevented. What causes them? Drownings occur because the victim made the wrong decision, did not realize the dangers of boating in rough, cold water, was not properly prepared, had the wrong equipment, or failed to wear a life-jacket (PFD). Small boats, by their very nature, are extremely unstable crafts. Often the victim of a small boat accident did not realize just how unstable his craft was. Add to this, cold, rough water, and the chances for survival for the sportsman fallen overboard are very slim. COLD WATER KILLS—even those in excellent condition who know how to swim.
The Five Primary Causes of Water Deaths are:
Hypothermia – The rapid loss of body heat in cold water.
“Dry” Drowning – Constriction of the throat, and the resulting suffocation, due to a sudden inrush of cold water.
“Wet” Drowning – The displacement of air in the lungs by water.
Massive Heart Attacks in older, out-of-shape, non-swimmers in cold water.
Being run over by own boat, especially when starting in gear.
DROWNING IS THE PRIME CAUSE OF HUNTING DEATHS!
Aggressive CPR (rescue breathing and heart massage) can save your life. What do you and your fishing, hunting, and canoeing friends know about it?
MANY PEOPLE—APPARENTLY DEAD FROM DROWNING—MAY NOT BE!
Cold water not only kills, but in some instances, it preserves. Warming drowning victims from the inside out by CPR or warm, moist inhalation may bring them back to life!
Posted by Main Line Sportsman at 1:10 PM No comments: 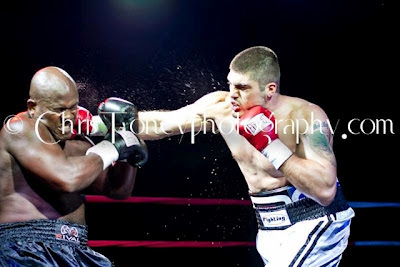 On Friday evening heavyweght contender Joey Cusumano entered the ring looking for another win. he got it....besting journeyman Taffou Asongwire in a unanimous decision. Based on the photo, one would conclude Joey won by a KO. However, Taffou's head is like a block of concrete...an iron jaw as they say. Joey clobbered him with several very powerful shots but could not knock out the tough Canadian. Thank to Chris Toney Photography for this action shot. We are working on future dates for Joey to keep fighting and the team is excited about his progress.